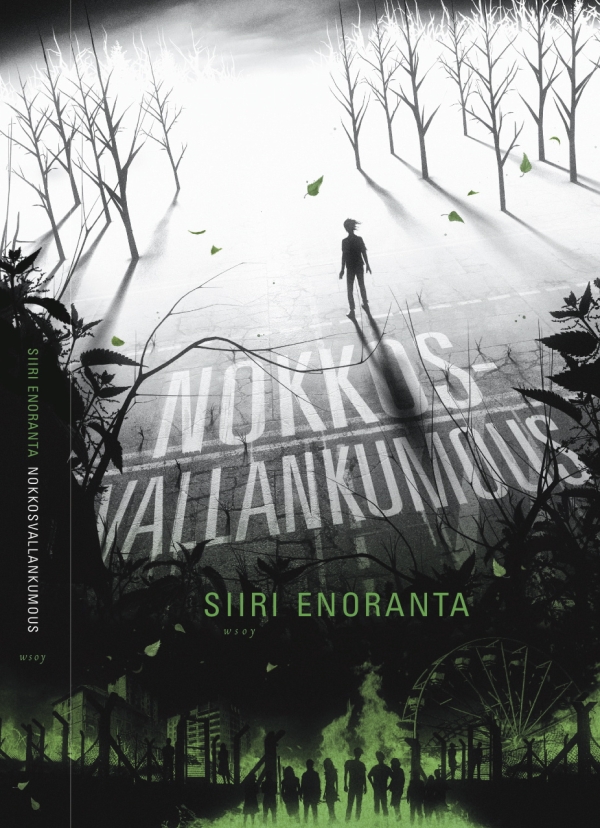 Dharan has always been the one who ends up shouldering responsibility, the one who leads the world to revolution, the one who fixes everything, the reason everything is destroyed. Vayu has never really been anyone. They meet in a reality where the sun hasn’t shone in years, the pillars of civilization have crumbled, and the ragged Nettle Children brew their revolution in a seized amusement park. But they also meet in that other place, where the elm still sends shadows dancing across their naked skin, the paradise where the past is slick with blood.

The Nettler Revolt was nominated for the Topelius Prize and the Kuvastaja Award in 2014 and received the Tampere City Literary Award in 2013.

I hastened my skateboard and raced out in front of the others. That day my thoughts wouldn’t obey me. There was something wrong with Vayu. He was sitting on the handlebars of Mattan’s bike, gripping it with both hands, his face pale, and I refused to look at him. He got me imagining strange things. Maybe it was a side effect of the dust, because I didn’t get headaches or nosebleeds like other people. It was just my skin, even greyer than normal, and oddly coarse.
”We’re going to take Vayu with us, aren’t we?” Miknor had asked, once we had finished digging with our board-ends and crowbars and lowered the charred bones of Vayu’s mother into the shallow hole. Vayu hadn’t helped us dig, and no one had expected him to. Aie had sat down on a rock to keep him company. ”He doesn’t have anywhere to go,” Miknor had said. ”Or do you, Vayu?”
”No,” said Vayu, his face blank.
Of course we would take him with us the way we would take anyone who was an orphan, abandoned, a runaway, alone. That’s what we were, the Nettlers, and that’s how we grew. It hadn’t occurred to me, though. I hadn’t let it occur to me. But since it was Miknor who suggested it, it wouldn’t be my fault. I wasn’t the one who wanted to bring Vayu along; Miknor was. Krito would have to understand.
”Do you want to come?” I asked without looking in his blue eyes. I had been searching for them for weeks, and here they were now, it had to be them, no one else had pale blue wolf eyes like that, and I couldn’t look at them. ”Do you want to join us Nettlers?”

”One of the most interesting Finnish fantasy authors writing now is Siiri Enoranta. Her latest work, the Nettler Revolt, is an idiosyncratic mesh of dystopic sci-fi and fantasy. ”
– Vesa Sisättö, Helsingin Sanomat newspaper

”Yet in a good way, the author’s youth pushes through the experience: the ability to think a little differently than earlier generations, the desire to create a slightly different literary world. The turns of phrase are fresh, wise, beautiful, and unique, as is the worldview that colours the entire story.”
– Kaisa Järvelä, Aamulehti newspaper

”The blurb on the back cover promises a book that is a “portrayal of the future, a fantasy tale, a hellish dystopia, and a love story,” all in one package. And to the writer’s credit, I have to say that this time this is not false advertising – the Nettler Revolt truly is all of these things. The combination is peculiar, but it works.”
– Oona Juutinen, Voima magazine

”Enoranta’s language is breathtakingly dense and, despite the fast-paced action, at times dreamily lyrical. The Nettler Revolt is a dazzling example of the talent with which our Finnish authors paint their works to life using a unique palette, even when picking up foreign trends.”
– Sini Helminen, Onnimanni magazine

“…she is a rare author who has the potential for just about anything when all of the pieces fall into place. And in the Nettler Revolt, they do. I loved it.”
– Marjis, Kirjamielellä blog

“The Nettler Revolt is an impressive work in any number of ways. When I got to the end, I once more marvelled at that incredible miracle that is an author’s imagination! – – The world of the book is in many aspects perfect, if you can say that about a world that has been broken. The mythological element dovetails effortlessly into the story, and you don’t question it for a second as you read. The story is sad, beautiful, frightening, horrible and everything in between.”
– Kirsin kirjanurkka blog